24 March 2022
The concept of Biodiversity Net Gain (BNG), introduced by the Environment Act 2021, is an approach to development which requires habitats for wildlife to be left in a measurably better state than they were prior to the development taking place.

In the 25 Year Environment Plan, the UK Government set out its aspiration to be the first generation to leave the environment in a better state than that which it inherited. Having consulted in 2018 on making BNG mandatory for new developments through the planning system, the proposals were formalised in the Environment Act 2021. The new legislation introduces a mandatory requirement to achieve at least a 10% BNG from the pre-development diversity value, while leaving much of the detail to be provided through secondary legislation, policy and guidance. The Environment Act provides that BNG off-site must be maintained for at least 30 years after the completion of the works to create or enhance a habitat. These obligations are secured by conservation covenants or planning obligations to ensure that habitats are maintained even if the land is sold.

Defra is presently consulting on the proposed BNG regulations and implementation, with responses due by 5 April 2022 (the Consultation).  The Consultation states that mandatory BNG for development requiring planning permission under the Town and Country Planning Act will commence two years after royal assent of the Environment Act (i.e. November 2023).

Biodiversity Units and the Mitigation Hierarchy

Implementing a mandatory BNG requirement requires a robust methodology for assessing and quantifying the baseline state of a habitat prior to development and the ecological impact of a project. The biodiversity gains and losses of a development are quantified in “biodiversity units”, using a metric which uses habitats as a proxy for biodiversity and calculates units by taking account of the type, extent and condition of habitats. Natural England has recently published Biodiversity Metric 3.0 which, subject to further consultation and any further updates, is expected to the metric specified for mandatory BNG.

Developers are expected to approach BNG in a manner that is consistent with the existing biodiversity mitigation hierarchy2, reflecting the spatial hierarchy preference for local enhancements, by approaching developments in the following order:

Offsite BNG and the market for biodiversity units

Where it is not possible to achieve the 10% BNG onsite, developers will be able to create or enhance habitats off site in order to meet the requirement. A key feature of the Environment Act is the intention to establish a new "compliance market" that will ensure the supply of off-site biodiversity units to developers that require them, with landowners or managers who can create or enhance habitats to the required standard on their land able to sell the resulting biodiversity units into the market. Additionally, it is intended that the market will be supported by various private sector suppliers and intermediaries, with  brokers, habitat banks (further explored below), large land agencies and start-up platforms likely to all play roles in facilitating such transactions. It is expected that policy and guidance will encourage off-site biodiversity gains to be delivered locally to the development site, incentivised by the biodiversity metric’s spatial multiplier. If off-site habitat enhancements cannot be sourced from the market, as a last resort, developers may purchase statutory biodiversity units from the UK Government.

To count towards a development’s BNG requirement, off-site biodiversity gains will need to be secured through a conservation covenant or a planning obligation and registered prior to final approval of the biodiversity gain plan on the Biodiversity Gain Site Register. However, off-site habitat creation does not need to be completed prior to its registration or the sale and allocation of biodiversity units to a development. The Consultation proposes that in order to minimise impact on development timeframes, off-site works should commence as soon as feasible and no more than 12 months after the discharge of the mandatory, pre-commencement BNG condition. 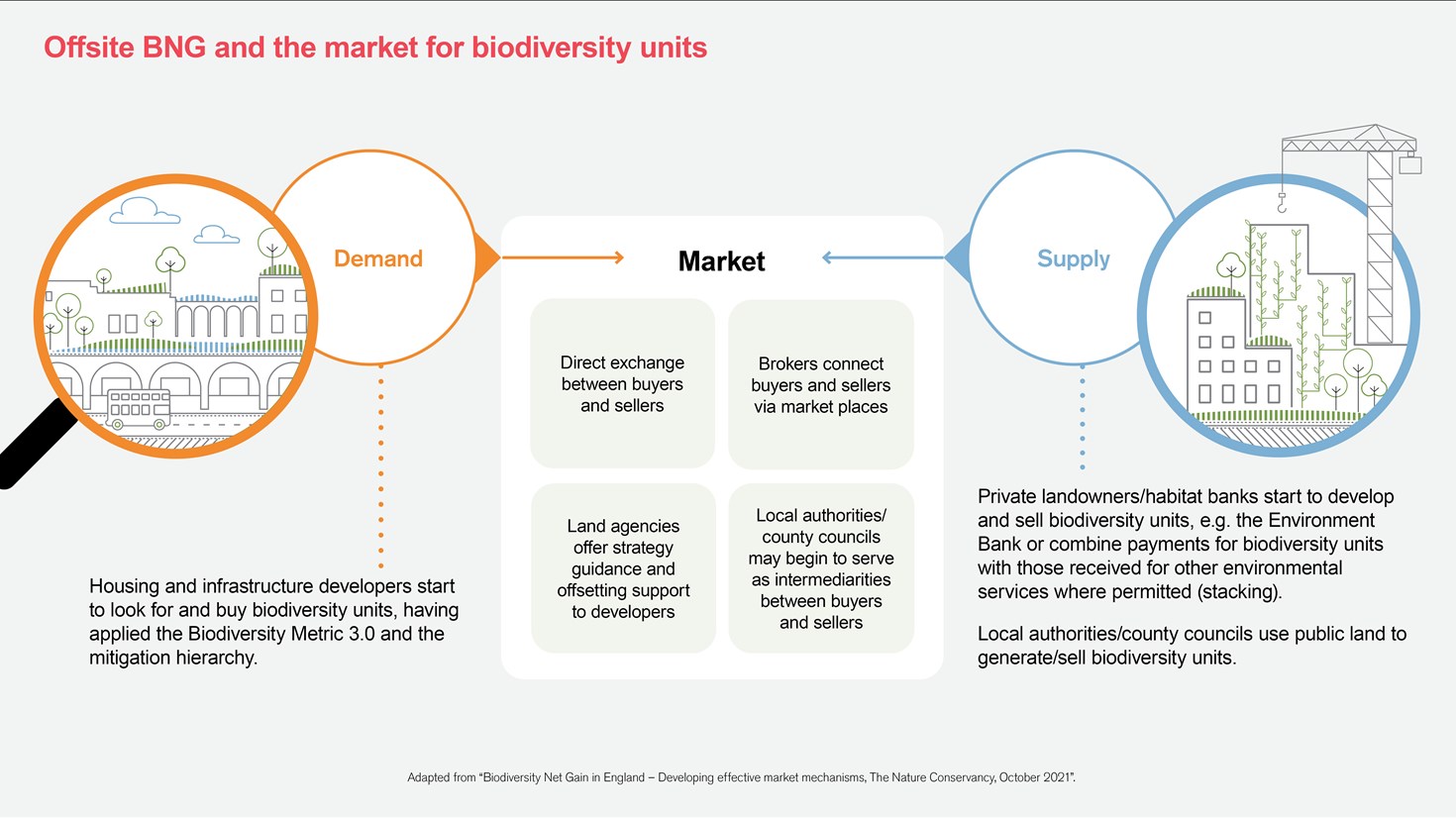 The ability to fulfil biodiversity gains off-site opens up a new market for landowners and managers to create or enhance habitats anywhere in England for the purposes of selling biodiversity units to developers requiring them. Habitat created or enhanced after 30 January 2020 will be eligible for registration and sale of the associated biodiversity units. It should be noted that planning authorities will also be able to sell biodiversity units from their own land, providing they manage any associated conflicts of interest appropriately. The Consultation additionally states that where a developer is able to exceed the statutory requirements for BNG on a given development site, Defra is minded to allow them to use or sell the excess biodiversity units generated. This permission would be based on the proviso that such excess gains are distinct from those necessary to meet the BNG requirements for the original development and are registered on the Biodiversity Gain Site Register.

The Consultation states that the UK Government currently does not propose to establish a centralised trading platform for biodiversity units but rather will rely on the private sector to facilitate the market and fulfil the required roles, such as brokering. Prices for biodiversity units will be agreed between buyers and sellers and pricing is likely to be reflective of the type of biodiversity that needs to be compensated for (and the associated costs of enhancing it), the opportunity costs of the land use and the relative scarcity of biodiversity units in the local market. While likely market pricing is at present uncertain and predictions vary widely, market analysis carried out for Defra in early 2021 estimated that the introduction of mandatory BNG could generate an annual demand for approximately 6,200 off-site biodiversity units per annum with a market value of £135,000,000.3  However, it is understood that certain local authorities are requiring a 20% BNG to be achieved in their local plans, in excess of the 10% mandatory BNG introduced by the Environment Act 2021. Such “gold plating” of the requirements by certain local authorities is likely to increase the need for developers to satisfy the BNG requirements of their developments offsite and further increase demand in the BNG market.

The Consultation also recognises the role of “habitat banking” to smooth the supply of biodiversity units and promote market liquidity by carrying out the work to establish the habitat in advance and “banking” the resulting units until they are required by developers and can be acquired, therefore enabling the delivery of larger and more strategic sites. A 2021 Discussion Paper by the Nature Conservancy considered the experience of New South Wales, Australia, where habitat banking reportedly resulted in the halving of developers’ time-to-permit and cost savings of AUD 35m (approximately £20m) across 20 projects.

A key principle in the implementation of off-site BNG is the requirement for "additionality". The Consultation makes clear that habitat enhancements will only be counted for the purpose of BNG if they are genuinely additive and not already being counted towards the fulfilment of another form of statutory obligation.

The market for biodiversity units will be required to function alongside other environmental markets, such as nutrient trading and the Woodland Carbon Code, as well as UK Government funded programmes. The Consultation recognises that one of the key uncertainties for landowners and managers is whether they will or not be able to combine multiple payments for different services or products provided from the same parcel of land. It further states that Defra is minded to permit landowners and managers to combine payments for biodiversity units with other payments for environmental services, provided they are paying for distinct and additional outcomes (for example, carbon sequestration and biodiversity benefits).

In the development of a new regulatory framework, the greatest challenge is always likely to be the careful policy and regulatory design required in order to provide the various participants with the confidence to enter the market and ensure that it functions well. Many project sponsors and developers are likely to remain in "wait and see" mode until the detail of the various challenges presented by implementation are worked through.

Risks of a poorly designed BNG market and implementation challenges include:

Despite these potential challenges, the creation of a well-functioning, liquid market in the UK could create additional opportunities, including having a positive, multiplier effect on the private sector whereby companies look to offset their biodiversity impacts on a voluntary basis in order to become "biodiversity neutral" in much the same way that targets for carbon neutrality have become mainstream. Additionally, a discussion paper produced by the Nature Conservancy in October 2021 highlighted the income opportunities that BNG could present for local authorities, citing that Warwickshire and Greater Manchester are already pursuing BNG as opportunities to fund enhancements to local parks and green space while generating additional income. However, this opportunity needs to be carefully balanced with the risk of crowding out private market participants and management of conflicts of interest where such local authorities are also presiding over the planning aspects of developments.

Through stating its intention to create a new compliance market in relation to the trading of biodiversity units, the Government has signalled that a significant amount of private market innovation could happen at landscape level and potential market participants will be closely watching the implementation of the market framework over the coming months.

1 For example, exemptions are proposed to be made for householder applications, change of use applications and developments impacting habitat areas below a "de minimus" threshold.