The 137 participating countries signed-up to the OECD inclusive framework for a 15% global minimum tax may choose whether they wish to adopt the OECD Pillar Two Model Rules and must accept the application of Pillar Two Rules by other countries. But whether this will mark an end to international tax competition on tax rates - the so-called "race to the bottom" that has seen headline rates decline from an OECD average of over 40% forty years ago to 23% today - remains to be seen.

One important development that may influence how jurisdictions compete on tax is the permission given in the Pillar Two Model Rules for their governments to create "qualified domestic minimum top-up taxes" (or QDMTTs for short).

A QDMTT is a minimum tax that is incorporated into the domestic law of a jurisdiction. It must compute profits and calculate any top-up tax due in the same way as the Pillar Two rules themselves. To ensure a level playing field, a QDMTT must be implemented and administered in a way that is consistent with the Model Rules with no collateral or other benefits. The OECD will develop processes to help governments and tax authorities assess whether a proposed minimum tax will constitute a QDMTT.

Once a domestic minimum tax meets the QDMTT conditions, any QDMTT paid by an entity will be fully creditable against any liability under Pillar Two rules. This means that a QDMTT will effectively change the order in which jurisdictions are entitled to charge top-up taxes where the effective tax rate of an entity within Pillar Two falls below the 15% global minimum rate. The QDMTT is prioritized with the result that a jurisdiction with a QDMTT becomes the first in line to receive any top-up revenue from entities located in its jurisdiction. Without a QDMTT, that revenue would go to another country as determined by the Pillar Two rule order. For businesses, the effect of a QDMTT is to direct where any top-up tax is paid - there should be no change in the amount of top-up tax that is due (although as matters currently stand, there could be some unfortunate interactions with the US GILTI regime for US parented groups).

A number of countries including Hong Kong, Singapore and Switzerland are said to be considering QDMTT regimes. An EU Directive (presently in draft) that will implement the Pillar Two proposals across the EU will allow EU Member States to impose domestic minimum taxes. The UK is also exploring the idea of a UK domestic minimum tax (UK DMT) and has started a consultation process. The UK Government favours a domestic minimum tax because it will ensure that any top-up tax due from entities located in the UK will go directly to the UK Exchequer. Although UK headline corporation tax rates are well-above the global minimum rate, top-up taxes may be due because the effective rate of tax for Pillar Two purposes is calculated in respect of profits determined from financial accounts. Timing and other computational differences in a particular year may result in an effective tax rate of less than 15% so creating a top-up tax liability. The UK Government argues that collecting this tax via a UK DMT will significantly reduce compliance burdens for multinational groups by preventing them from being subject to top-up taxes in other countries in respect of their UK operations.

Current thinking in the UK is that a UK DMT would only be relevant for entities within the scope of Pillar Two. The UK Government welcomes views on whether a UK DMT should apply to all in scope groups or only to those groups that are headquartered in the UK. Groups with less than €750m of global consolidated revenue would not be caught by a UK DMT in any event. Wholly domestic groups would also seem to be excluded. If so, this would represent a point of difference with the EU. To comply with the non-discrimination obligations of the EU Treaties, the draft EU directive applies the Pillar Two rules to wholly domestic large (>€750m euro) groups as well as multinational entities.

Jurisdictions that adopt the Pillar Two rules can still compete on corporation tax rates for entities outside Pillar Two’s reach. So, for example, Ireland will be able to maintain its 12.5% corporation tax rate for businesses with annual revenues below €750m. A paper published by the Centre for Business Tax at Oxford University argues that QDMTTs may even increase the incentives for certain jurisdictions to offer low (possibly zero) corporate income tax rates to all corporate entities (including large MNEs). This is because such jurisdictions could comply with OECD rules, adopt QDMTTs and collect top-up taxes from entities within the scope of Pillar Two. On this analysis, QDMTTs could even start to replace corporate income taxes, although given that the tax base for QDMTTs would be based on financial accounting rather than tax computations, this would be a very significant change in how corporate entities are taxed.

Are there any downsides?

Jurisdictions enthusiasm for QDMTTs may be tempered by the prospect of imposing additional compliance costs on business. It may be claimed that these costs should not be high because any QDMTT must duplicate the Pillar Two rules and businesses need to comply with Pillar Two in any event. But the Pillar Two rules have already been criticised for their complexity and may yet change in form. In order to get the priority taxing rights, QDMTTs must closely follow these evolving rules, as well as operate as separate taxes with their own set of rules, guidance and administrative requirements. Large groups will certainly need to add monitoring the introduction of QDMTTs across jurisdictions to their to-do list. 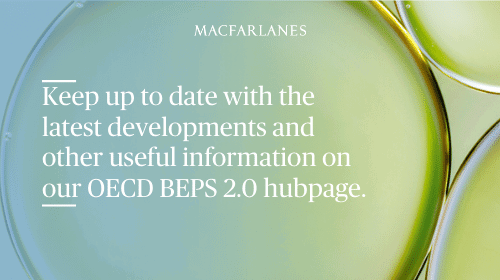