There are a number of reasons why an adjustment may have to be made to the tax liability of a constituent entity (CE) for a prior year – and, under Article 4.6.1 of the Model Rules, to the extent there are changes in the tax liability after filing of the GloBE Information Return, additions or reductions to taxes are identified and allocated to a particular jurisdiction and time period.

Why would you make post-filing adjustments?

Adjustments may, for example, arise due to:

How are increases to covered taxes treated?

An increase to a CE’s covered taxes for a previous year is treated as an increase in covered taxes in the current year (i.e. in the fiscal year in which the adjustment is made). This has the effect that refunds of top-up tax paid with respect to prior years will not occur under Article 4.6.1.

It is also worth noting that deferred tax expenses recognised in respect of uncertain tax positions are not taken into account in the year they are recognised (pursuant to Article 4.4.6) – thus, all of the increase to a CE’s covered taxes is taken into account in the current year (i.e. in the fiscal year in which the adjustment is made) even if some amounts have already been accrued in a previous year.

How are reductions in covered taxes treated?

A material (i.e. not immaterial – see below) decrease in covered taxes for a previous year requires the MNE Group to do two things:

The OECD commentary to the Model Rules makes it clear that the adjustments for material decreases must be made in respect of the relevant prior year to which the adjustment relates because the over-statement of covered taxes may have extinguished a potential top-up tax liability in that year and simply reducing covered taxes in the current year may not effectively recapture that top-up tax. This is a sensible approach, although complying with these rules by having to recalculate the ETR and top-up tax for a prior year will lead to increased administrative burdens for MNE Groups.

As a concession, the Model Rules permit the filing CE to elect for “immaterial” decreases (defined as an aggregate decrease of less than EUR 1 million in the adjusted covered taxes for the jurisdiction for a fiscal year) to be taken into account in the fiscal year in which the adjustment is made (instead of adjusting the prior year). This election is made on an annual basis.

Most countries allow taxpayers to offset losses against profits so that they are taxed on no more than the overall net profit that they make over time – for example, UK domestic rules permit trading losses to be carried back one year (or three years for losses incurred during accounting periods ending between 1 April 2020 and 31 March 2022). The Model Rules seek to achieve the same outcome using deferred tax accounting, and Article 4.6.1 of the Model Rules applies when a domestic tax loss is carried back to a prior year.

This ensures the loss is effectively matched to the period in which it is relieved under domestic tax rules and prevents the MNE Group from appearing to have a low ETR solely because its domestic tax liability has been reduced on account of a legitimate loss relief.

Example: ABC Co is the only CE of a MNE Group in Country A. Country A has a 20% tax rate and permits loss carry-backs. 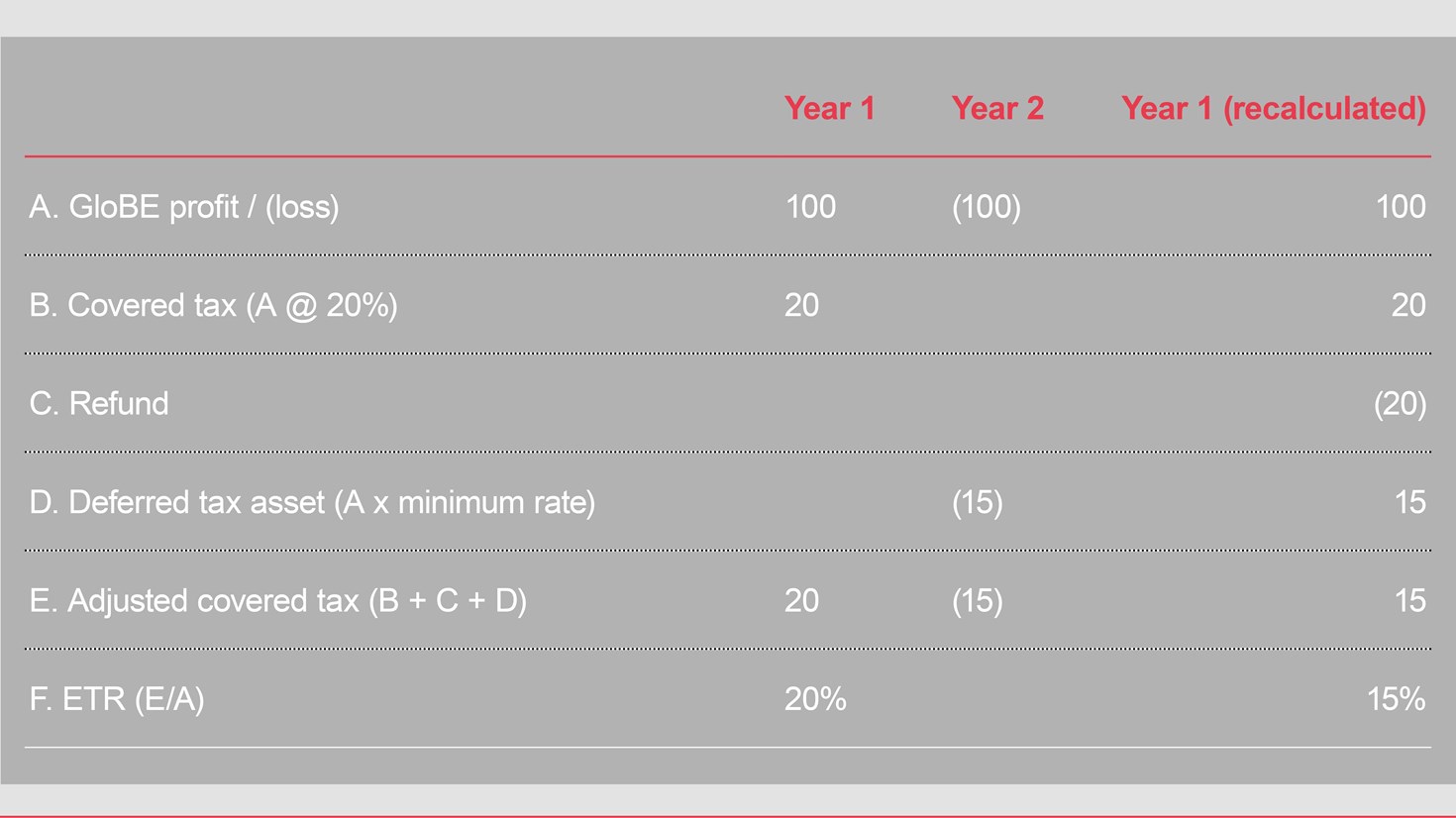 What if there is non-payment within three years?

How are changes in tax rates addressed?

The Model Rules govern where there is:

The amount of any deferred tax expense that results from a reduction to the applicable domestic tax rate will only lead to an adjustment if it results in the application of a rate that is less than the minimum rate. In such a case, the deferred tax expense previously claimed as a covered tax is adjusted to the correct value (which is the amount of such tax that will actually be paid upon reversal of the deferred tax liability). This means that there will be a decrease in covered taxes for that previous year, thereby requiring the ETR and top-up tax to be recalculated – and any top-up tax will be due in the current year.

In contrast, an amount of deferred tax expense that results from an increase to the appliable domestic tax rate is treated as an adjustment to a CE’s liability for covered taxes – but this adjustment is (i) only made for a previous fiscal year when that amount was originally recorded at a rate less than the minimum rate and the increase is capped at the deferred tax expense recast at the minimum rate, and (ii) deferred until the payment of the tax and is.

Do the Model Rules help to ease the administrative burdens created by these rules?

In addition, to the extent additional top-up tax results from an adjustment and recalculation, such amount of top-up tax is paid in the current fiscal year – in other words, no amended return is required for the prior year.

However, if the MNE Group was subject to top-up tax in the prior year but not in the year the adjustment is recognised, then there is a risk that it may face double taxation: first under the Model Rules, and then again under the domestic tax adjustment (which is not recognised for GloBE purposes). Although this may not often occur in practice, this undesirable outcome appears to be the result of the trade-off between the Model Rules’ desire for practical simplicity, and technical accuracy.