The question of how transparent entities are treated within the GloBE rules is important in determining how profits are allocated. The model rules provide some guidelines but inevitably there are points of uncertainty.

Just like the special rules that exist to deal with the allocation of GloBE income to permanent establishments (see our separate note covers these aspects), the model rules deal with the treatment of tax transparent entities, such as partnerships and trusts, to ensure there is a suitable mechanism to allocate income between the entity and the owners.

What is a transparent entity?

There is an exception to this definition. If the entity is treated as opaque in another jurisdiction, and by this the model rules mean if it is tax resident and subject to a covered tax on its income or profit in another jurisdiction, then it is not a flow-through entity.  For example, take a US LLC that is treated as transparent in the US but assume it is tax resident in the UK. The UK treats the US LLC as an opaque entity and would subject it to corporation tax, therefore it would not be a flow-through entity for the purposes of the GloBE rules. The UK tax resident US LLC would instead be classified as a UK Constituent Entity and brought within the scope of the standard model rules.

The second is a “reverse hybrid entity” which exists where the flow-through entity is not treated as fiscally transparent in the jurisdiction in which the owner is located and therefore the owners are not required to recognise the income/expenditure until it is distributed to them.

While the examples above have assumed the owners are in the same jurisdiction, the reality is owners are likely to be located in multiple jurisdictions. The use of these categories means the rules allow one entity to have a combination of definitions, so the same flow-through entity might be treated as both tax transparent and a reverse hybrid depending on the treatment by different owners in different locations.

In summary, whether a flow-through entity is considered a tax transparent entity or a reverse hybrid entity depends on the location of the owner and the way in which that jurisdiction treats the entity.

What difference does it make if an entity is tax transparent or a reverse hybrid under the GloBE rules?

The difference in treatment determines where the GLoBE income and taxes of the flow-through entity are assigned. In the case of a tax transparent entity (that is not a UPE), they are assigned to the jurisdiction where the owner is located. For tax transparent entities which are the UPE or reverse hybrid entities, income and taxes are allocated to the jurisdiction of the entity itself.

Allocation of income or losses from flow through entities

The mechanics of allocating GloBE income to the owners follows three steps. First only the income of owners that are members of the MNE group are counted, any amounts attributable to owners outside of the group are excluded. Second, any amount associated with a PE is also excluded to ensure it is not double counted (as explained in our other note, PEs are treated as separate Constituent Entities for the GloBE calculation). Third, the remaining amount is allocated as follows:

What is meant by ownership interests?

The allocation of GloBE income to the entity’s owner is undertaken in accordance with their ownership interests. This takes into account the rights on income or profits attached to the equity interests, including any agreements or contracts that derive from such interests.

UPE is a flow-through entity

Where the UPE is a flow-through entity and tax transparent under the GloBE rules, the default treatment is that the UPE’s GloBE income is allocated to the jurisdiction in which the entity was created.

The model rules also outline a number of scenarios where the GloBE income is reduced because it is attributable to the ownership interests. The scenarios include where the holder is subject to tax at a nominal rate above 15%; exempt from tax for legitimate policy reasons (for example because it is a pension fund or governmental entity); and certain minority interests. The GloBE rules recognise that determining the tax position of minority owners may be burdensome and also those individuals would not ordinarily be subject to preferential income tax rates below the minimum rate of 15%. As such, the GloBE income reduction, a safe harbour if you will, extends to holders of ownership interests of natural persons i.e. an individual that has an interest of less than 5% interest where the individual is tax resident and subject to income tax in the UPE jurisdiction.

In the example set out below, this would mean that the UK LLP’s GloBE income is reduced to nil. This is as a result of the reductions noted above. Firstly, we assume that the French resident partners are subject to income tax at a rate above 15% and therefore it can be concluded that the GloBE income is being taxed at an appropriate level. Secondly, the UK resident partners have ownership interests of less than 5% and those individuals are tax resident and subject to tax in the UPE’s jurisdiction, i.e. the UK. 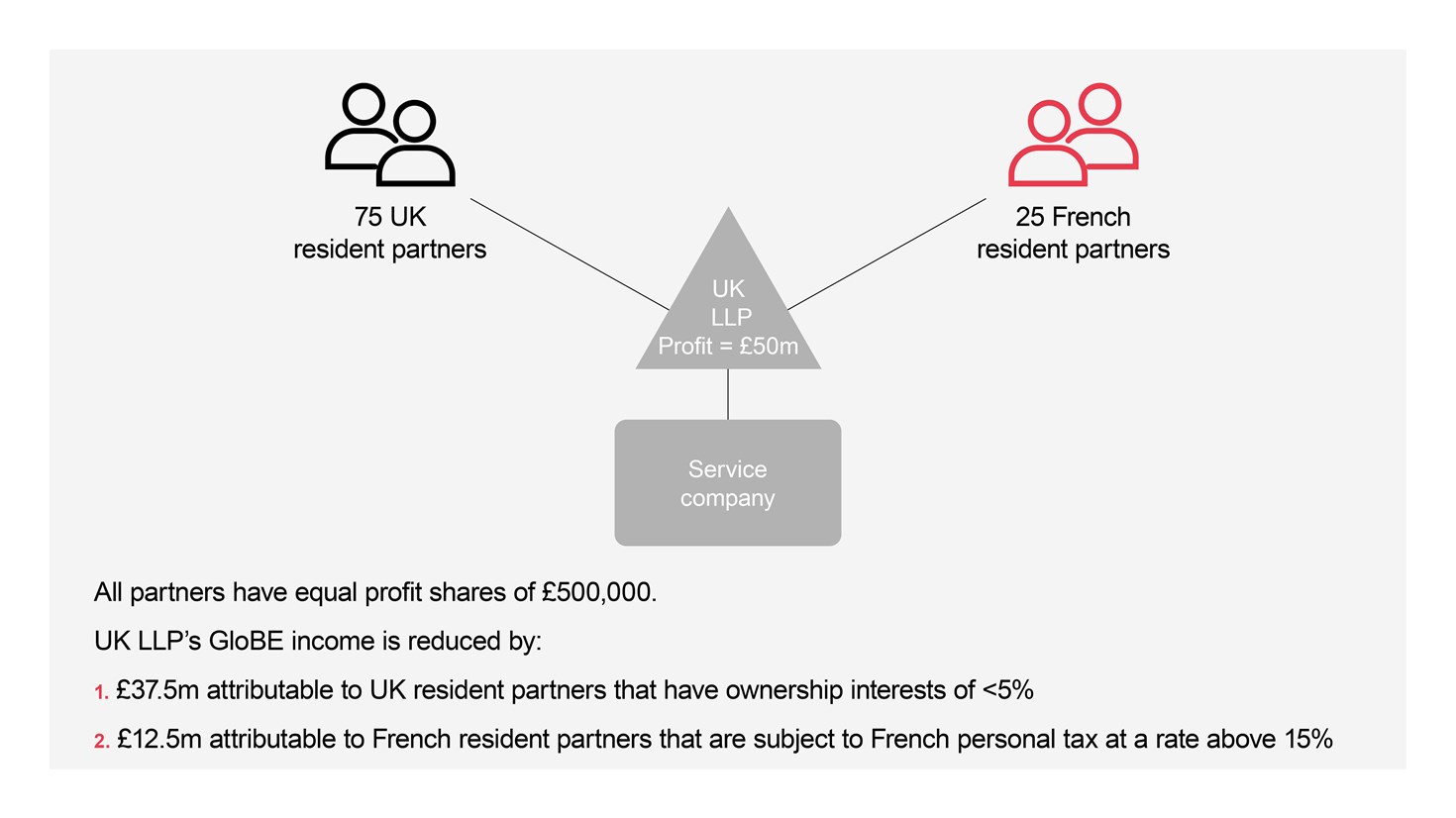 However, there is one quirk with how these rules operate for minority owners. The rules rely on the minority owners (whether pension fund holders or otherwise) being resident in the UPE jurisdiction to benefit from the special treatment.

The UPE jurisdiction is the jurisdiction in which the transparent entity in question was created, that is, in which it was legally constituted. In the case of a transparent entity that jurisdiction may have no connection to where the entity undertakes activities or where its members are located. Rather, it may have been chosen because that jurisdiction has, for example, a commercially attractive partnership law or a reliable legal system for example, English partnerships are often used in commercial structures for these reasons. It remains to be seen whether domestic implementation will overlook this deficiency within the model rules.

One area of uncertainty relates the treatment of income and gains received from a transparent entity that is not a constituent entity, for example an MNE Group that receives returns in respect of an investment it has made via a partnership. The model rules do explain the treatment for receipts from corporate entities that are not constituent entities - those receipts are taxable under the GloBE rules unless they are excluded dividends or excluded equity gains.

Despite the silence in the model rules, the commentary makes the point that a constituent entity’s income should include “distributions received or accrued in respect of an Ownership Interest held in a flow-through entity” and states that such distributions may be treated as excluded dividends when the conditions as to ownership percentage and holding period are met. By implication, the equity gain exclusion is also capable of applying to gains or losses on disposal of an interest in a partnership. This is a novel approach and it would be helpful for the commentary to expand on it - including to clarify how returns from transparent entities that do not qualify for exclusion should be treated.

Based on our reading, this would mean that if an MNE Group received a profit share from a 10%+ interest in an investment partnership that is not a constituent entity of the group then that profit share will be an excluded dividend and excluded from the group’s GloBE income. This is a point worth monitoring in the domestic implementation of the rules.